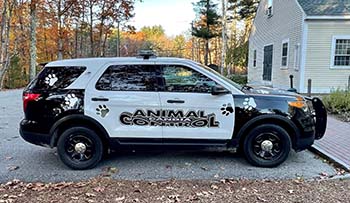 Animal Control handles all kinds of animals, from injured/sick birds, snakes, and skunks, to providing traps to those who need to get a pesky critter out of the yard. Looking for and taking care of lost animals, such as horses, pigs, cows, and dogs, is a significant part of the job.

In order to keep dogs safe and to protect them, there are a few things you must know.

License your dog every year by April 30

The State of New Hampshire requires that every owner or keeper of a dog four months old or older shall annually cause it to be registered, numbered, described, and licensed for one year in the city or town in which the dog is kept. The license shall be effective from May 1st of each year to April 30th of the subsequent year.

All dogs must have a current rabies vaccination at time of licensing. Vaccinations are generally for a three-year period; for a young dog, the first one may be only for a year before being re-administered.

How much does it cost?

How do I license my dog?

You can register your dog in person at the Town Clerk's Office during regular office hours. To register online, visit Online Dog Licensing.

What happens if I don't license my dog?

Failure to license your dog is a violation of State law. After June 1, any unlicensed dog will pay an additional fee of $1.00 per dog. After mid-July, there will be a $25.00 fine per dog in addition to the late fee.

Candia has a leash law

Your dog should always be under your control. This is for the dog’s safety as well as the safety of other animals and/or people.

When is a dog considered to be a nuisance, a menace, or vicious

Under section NHRSA 466:31:II, a dog is considered to be a nuisance, a menace, or vicious to persons or to property under any or all but not limited to the following conditions:

Penalties associated with these offenses:

Some files on this site require a PDF reader. Download the latest Adobe Reader.