Cemetery Trustees meetings are held on the 3rd Thursday of each month at 6:30 PM in the Town Office Meeting Room. 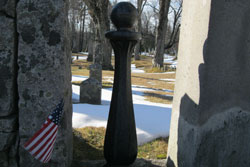 The Cemetery Trustees are charged with the operation and maintenance of all Town cemeteries.

The Cemetery Trustees are composed of five elected members.

In July of 2015, Cemetery Trustees formally adopted rules and regulations for their conduct of business and for the use of Candia Cemeteries by the public. To view these documents, visit the Documents & Forms page.

The East Candia Cemetery is a historic post-Georgian cemetery surrounded by Beautiful Granite walls.  Approximately 275 bodies are laid to rest in this cemetery.  Slate and marble tombstones decorate the hallowed land and show at least three Revolutionary patriots, 3 War of 1812 patriots and 3 Civil War patriots are buried there. The last burial took place in 1974 and it is not known how many “open” graves there are left within these hallowed walls at this time.  There is a deed but the deed does not specify it was given to the Town, only that it was given to a few men in the early 1800s to be used as a place for human burials only.  The Town has been lovingly maintaining this cemetery for decades.  It is being documented in Cemetery Management Software and is almost complete. It is unknown if there is room for more burials.  Most burials were not documented and the Sections were not recorded.  At this time, we are considering this cemetery full and no more burials will take place here.  The earliest recorded burial is in 1819 when they buried Mary F. Clifford on 19 Jul 1819.

The Village Cemetery and the Baptist (Old Village) Cemetery

These two are almost considered one in the same.  The Baptist cemetery was a Georgian cemetery and still has a few remaining bodies and is clearly abandoned on the top of a hill behind the Baptist Church and is in bad repair.  Most of the bodies were removed across the street from the Baptist Church to the New Village Cemetery; I have counted at least 4 people still buried there.  The remaining graveyard has been abandoned for many years.

I consider the New Village Cemetery a Victorian-Era cemetery with a massive wrought iron gated entrance and a carriage road that winds downhill and is lined with huge oak trees of that time period and beautiful monuments and headstones.  This cemetery was incorporated by a handful of men in the mid-1800s.  It has been maintained by the town for over half a century or more.  There are still open lots, though with lost records of burials and deed owners, it all needs to be documented before we can open it for future burials and this graveyard can be expanded on when needed in the future.

Another Post-Georgian cemetery that was laid out and walled in on top of Bean Island Hill.  The Town of Candia has taken under its wing to maintain this early Bean Family Cemetery for many decades.  The last deed recording this cemetery as a private cemetery is in 1873 when it was owned by Jesse Higgins. After this, the cemetery was taken out of the deeds and just “disappeared” in the documents.  This Cemetery will be getting the much needed repairs at the gate area in order to make it safe to walk through again.  The Trustees have a map of this cemetery and has recorded each known burial in Cemetery Management Software.  The earliest recorded burial was in 1816, when Mary Robinson died on March 1st.  This cemetery is full; there is no more room to add the deceased.

A Georgian era cemetery atop the “hill” on the corner of Route 27 and South Road.  Many of our first families are buried here.  The only “public” cemetery at the time, when the first division of land was in process in 1754, our towns folk came from all over Charmingfare parish to bury their loved ones in this beautiful historic cemetery.  Early on, like in many towns, traditionally, the caskets were wheeled up the hill by horse pulled casket wagons and left at the site to rot away, as it became a bit crowded; it was decided to have one Hearst wagon that would deliver the deceased to the gravesite.  Gov. Frederick Smith dedicated a wrought Iron gate for this cemetery in 18__ and many Revolutionary War patriots are buried here, as well as other early wars and names of Candia first families can be seen on the slate epitaphs dedicated to loved ones who will be forever missed.  Take a walk to the bottom of the hill and look up to the church for a beautiful picturesque vision of days gone by.

Sarah Holbrook and others developed this land as a burial “business” in the about 1860s.  It was then called “Main Street Cemetery”.  There were a few burials before Sarah deeded the land over to the Town in or around 1878 and it was around this time that the Town changed the name to Holbrook Cemetery.  In 1930, there were several hundred buried in the sections of the cemetery closest to “Main Street” of Holbrook and an addition was put on adding about 2 acres of burial ground.  Today, Holbrook Cemetery is our only active Cemetery.  The earliest Deed we can find recorded is for Jane C. Griffin in 1881.
Holbrook Cemetery Map

Formally called:  Lang, Smith, Colcord, Palmer and Reynold Cemetery, There are 5 small family plots located on private property that are not in the possession of the Town.  It is up to these landowners to take loving care of these historic graveyards.  If anyone who has a private burial ground on their property needs help to maintain them, please contact the Cemetery Trustees so that we may make arrangements with you to help you maintain them.

Some files on this site require a PDF reader. Download the latest Adobe Reader.